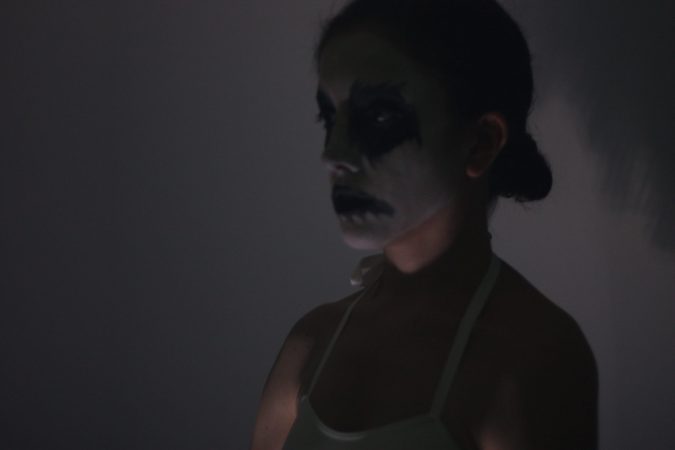 Great news! Kuo’s Eyes has been nominated for BEST EXPERIMENTAL SHORT at the INDIE SHORT FEST. List of December Nominees can be found HERE

A MESSAGE FROM THE CREEPY FILM FESTIVAL

“Congratulations to the 2018 Fall Festival Recipients of the Creepy Tree Exemplar Award in categories determined by our judging panel that their creepy creative project was exemplified! Show your support of a fellow member of the international horror community by following these amazing talents today! We could not be more proud to be showcasing all the talented filmmakers, screenwriters, and photographers that submitted their projects to the 2018 Fall Festival Season. Also, lets not forget the crews, family, and external supporters that helped them make it all a creepy reality! Check out all their achievement posts at #creepytreefilmfestival on Instagram, and connect with them on their social media pages and professional websites. For more information, or to connect to their projects through our website, visit https://www.creepytreefilmfestival.com&#8221;

Very happy to announce that Kuo’s Eyes has been nominated for Best Short Horror and Best Poster at the ALTERNATIVE FILM FESTIVAL Winter Edition in Ontario, Canada!

Happy to say that Kuo’s Eyes is an Official Selection of the INDIE SHORT FEST in LOS ANGELES, US.

Kuo’s Eyes is an Official Selection of the BLOODSTAINED INDIE FILM FESTIVAL in Tokyo, Japan!

Very happy to announce that Kuo’s Eyes has been awarded the Creepy Tree Exemplar Awards for CREEPY EDITING and CREEPY ACTOR/ACTRESS PERFORMANCE at the CREEPY TREE FILM  FALL FESTIVAL 2018! Follow this link below to see all CTEA recipient profiles. 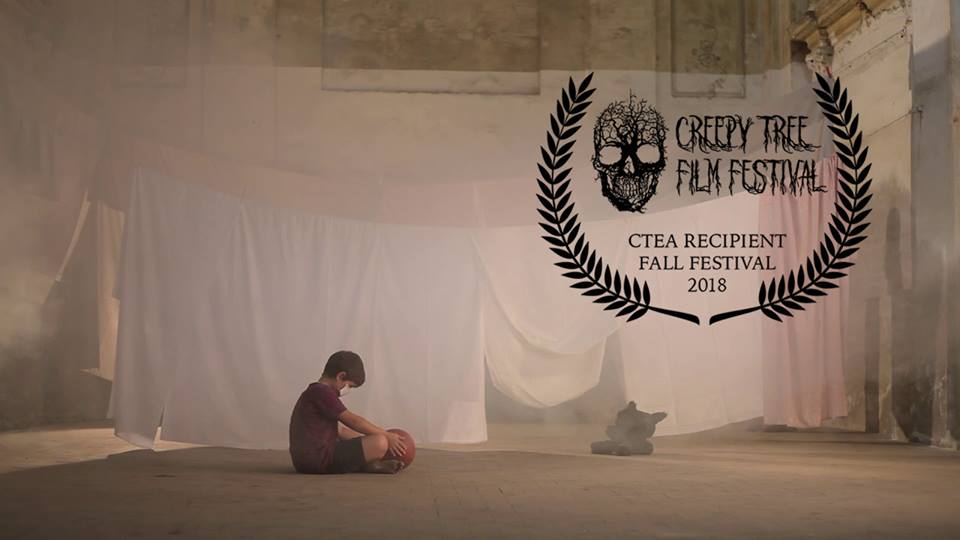 In December, Kuo’s Eyes will be travelling to Montevideo, Uruguay, for the Festival Montevideo Fantástico. More information and screening schedule here: http://www.arte7.com.uy/Pag/04/Programacion.htm

Kuo’s Eyes is returning to Mexico City in November for the STUFF MX FILM FESTIVAL! Kuo’s Eyes will screen at Laberinto Cultural SantaMA on November 14 2018 at 1PM. 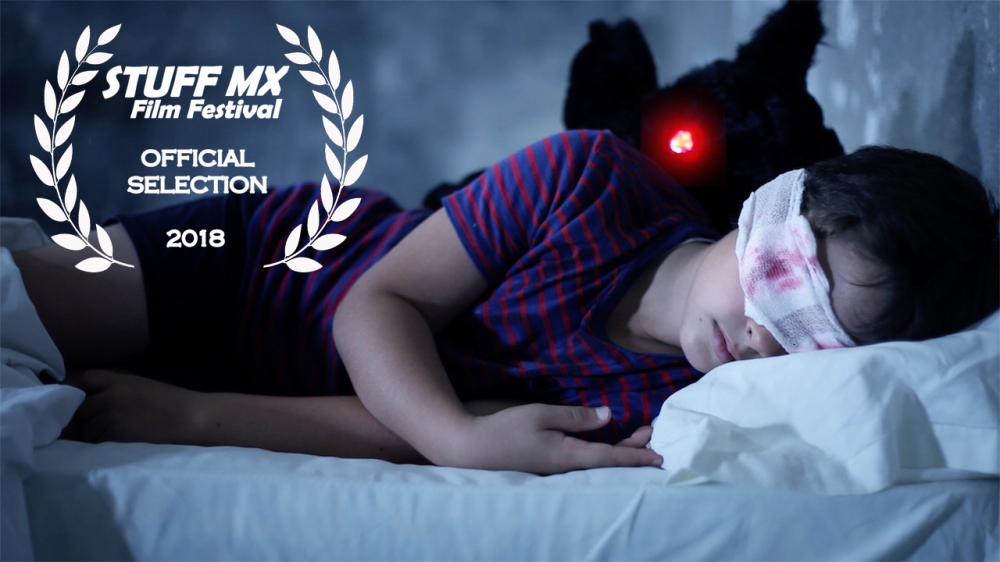 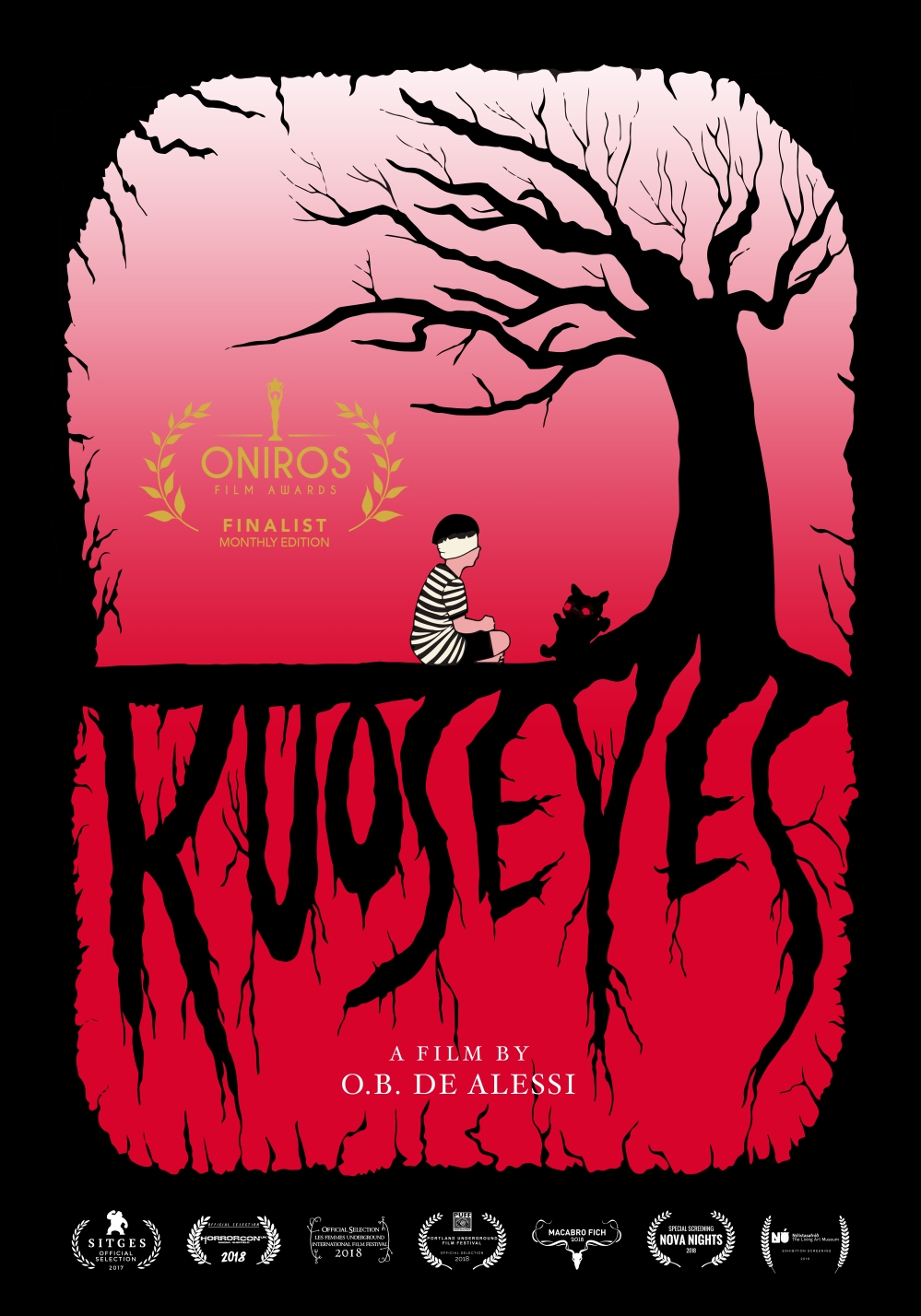 Kuo’s Eyes is an Official Selection of Macabro XVII Horror Film Festival! The film is  part of the Short Block “Mentes al Limite” and it will screen twice: on Wednesday, August 22 at 5 pm at the Sala QUETZALCÓATL and on Sunday, August 26 at 7pm at the CINEMATÓGRAFO DEL CHOPO.

Kuo’s Eyes is back to the US for Les Femmes Underground International Film Festival. The film was their First Official Selection and amongst 1 of 50 shorts chosen from over 3,000 submissions worldwide!

Les Femmes Undeground International Film Festival will take place at the Phoenix Centre For The Arts in Phoenix, Arizona, on September 1, 2018. Kuo’s Eyes will screen between 2:00 pm and 3:15 pm.

Writer/ filmmaker NICK TOTI has written an essay on O.B. De Alessi’s work for HAMMER TO NAIL. Follow the LINK to read it!

An interview between Nick and O.B. is coming up as well!

Happy to announce that Kuo’s Eyes will have its US Premiere at the Portland Underground Film Festival on Friday, May 18 at 9:30 pm. The screening will take place at the Clinton Street Theatre in Portland, Oregon.

KUO’S EYES is an Official Selection of HORRORCON UK 2018 – the most original horror convention in the UK! This year’s convention will focus on Italian Horror.

You are cordially invited to Yuck ‘n Yum’s first ever American exhibition. Don’t live in America? Don’t worry! We’ll be simultaneously communing with our friends Generator Projects in Dundee via a magic web portal. Our exhibition Interregnum opens at Soil Artist-Run Gallery in Seattle, WA, on the 3rd May 2018.
The show features exciting new works on from 10 artists on the topic of “interregnum” – a time of unrest between regimes. We’re in a transitionary period as a collective, and there is something very strange occurring in the places where we live. Brexit?! Trump?! Yuck ‘n Yum now looks to its network of artists to explore these times when normal rules no longer apply. Can people come together in this chaotic time to upend the status quo? A multitude of realities are seething and churning across the Internet and into the streets. 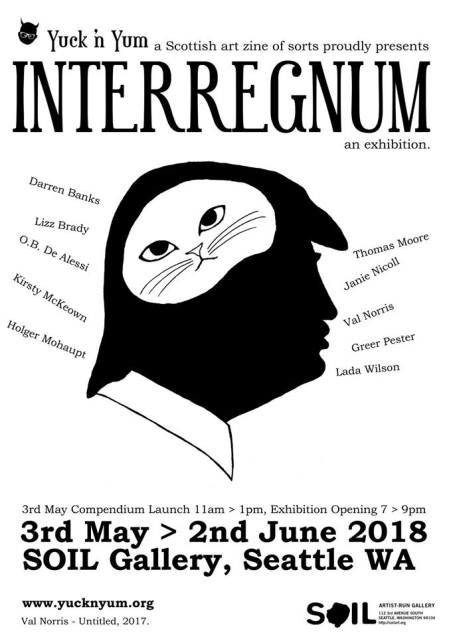 Conceived and hosted by BILLY CHAINSAW

ABOUT “Kuo’s Eyes”: Young Kuo is found unconscious in the woods with his eyes torn out. Using his stuffed bear companion Bainfu as a guide, he goes in search of the person responsible for this heinous act. It is equal parts traumatic, mysterious, magical, compelling – and overwhelmingly beautiful. The earlier part of the evening features a selection of O. B. De Alessi’s video works.

More information via the Horse Hospital

KUO’S EYES will premiere at the SITGES FANTASTIC FILM FESTIVAL OF CATALONIA 2017 in the Official Selection – Noves Visiones section.

The screening will be on October 8th 2017 at 1 am at the Prado Cinema, Sitges.

THE LIVING ART MUSEUM of Reykjavik will present my short film KUO’S EYES as part of the group exhibition THE PRIMAL SHELTER IS SITE FOR PRIMAL FEARS, curated by Patrik Aarnivaara (SE) and Maija Rudovska (LV).

This exhibition looks at the subject of fear and horror in relation to spatiality and architecture. The house in particular and architecture in general as an object and possible stage for horror, a place for imagination, action, a cause for psychological triggers, a primal shelter or future ruin, a safe place yet unsafe at the same time, which can possibly turn into a cage, a prison, and a dead fall.

Inspired by Eugene Thacker, JG Ballard and other writers that give us ways to imagine the separation between us and the world, that which is never completely graspable, the “world-in-itself” and the “world-without-us”.

Playing with the idea of architecture as an entity in itself, in a contemporary space or future landscape inhabitable for, or devoid of humans, as if architecture has consumed or outlived its inhabitants.

The project evolved from an interest in horror films as a genre where certain aesthetics and fear are often constructed by means of architecture. Research was conducted on the topic during a collaborative residency at HIAP in Helsinki a few years ago, initially with the titleScenography of Horror .

Images, texts and videos were collected and presented in a joint lecture in Helsinki a year later. The material and conclusions are the foundation for this exhibition project, The Primal Shelter is the Site for Primal Fears, taking place at The Living Art Museum in Reykjavik.

A presentation and launch of the photo editionPoundbury by Yuki Higashino will take place during the opening event.

The exhibition is also accompanied by excerpts from the book 24 ter rue de la pierre feuillèrewritten by Barbara Sirieix.